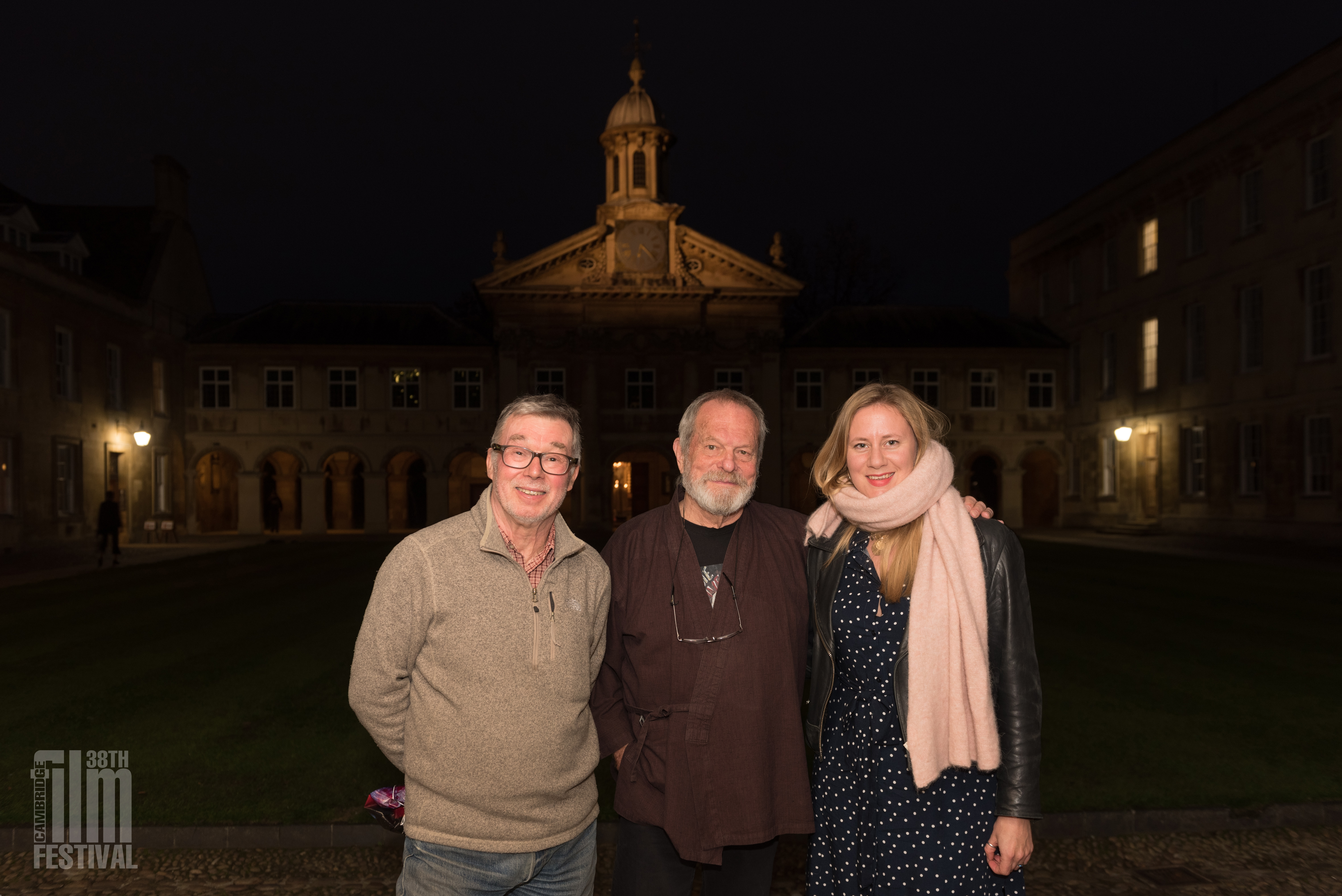 After over 35 years at the helm, Festival Director Tony Jones will step down following this October's 39th Cambridge Film Festival.

When it comes not only to film but to the film exhibition industry here in the UK, very few people can claim to have as broad or deep a knowledge as Tony Jones. It is this knowledge coupled with his unerring passion for supporting independent film which will be hugely missed, not only by all of us here at the Cambridge Film Festival but by the wider UK film sector.

There is no truer champion of film and the cinema experience than Tony Jones.

In his own words

"I came to Cambridge and made it my home and stayed longer than I ever imagined.

It has offered me opportunities that I could only have dreamed of and given me experiences that have been the envy of many. I started work at the Arts Cinema in the early 80s, and have worked on the Cambridge Film Festival ever since. I co-founded City Screen with Lyn Goleby and developed the more recent Arts Picturehouse, welcoming so many guests to the city and screening films from most countries of the world.

It has been an extraordinary journey, but after almost 40 years, it seems like a good time to bow out and give someone else the privilege of running this Festival in this great city of ours.

Over the years we’ve had some fantastic guests. The Italian master Francesco Rosi, American great Philip Kaufman (who insisted on paying for his own flight from San Francisco), the wonderful Monika Treut from Germany, Robert Bresson from France and the UK’s own Peter Greenaway, with many a controversial visit. Auteurs Patricia Rozema, Michael Winterbottom, Krzysztof Kieslowski, Michel Gondry, Costa-Gavras, Derek Jarman and Bruce Weber all made visits to present retrospectives. It felt like we were at the centre of the film world.

But screening the best and often un-certificated titles can cause problems. Curiosity got the better of the local Trading Standards Officer when we programmed Taxi zum Klo and Polissons et Galipettes. We provided test screenings (at the old Arts Cinema), but one year was enough – he never asked again.

This year, we have films from Africa, South and North America, most European countries, Russia, Japan, Pakistan, Iran, Afghanistan and Australia. We have films about climate change, human rights, women’s rights, prison conditions and mental health; films from the silent era with piano accompaniment, experimental films, artists’ films, documentaries and dramas. For a ‘small’ festival we pack a lot in! I’ve always tended to over-programme with an excellent team of programmers, and with the exhibition platform shifting, it seems both appropriate and necessary to offer such a wide-ranging programme.

Technology has advanced greatly over these 40 years. We introduced the Internet Movie Database at a festival in 1995. We developed technical innovations that are now commonplace. Cambridge was also the test bed for digital projection - though I never lost my personal preference for 70mm celluloid.

It has been an extraordinary personal journey, but I hope that many of you who have shared it with me have had some memorable experiences along the way. I hope to speak to many of you during the Festival, before or after you have sampled one of the many delights we have lined up, and that you will enjoy the Cambridge Film Festival for many years to come.

And at the end of all this, who is my favourite filmmaker? Buster Keaton! A genius and inspiration. He brought imagination and invention to the screen, from his humble beginnings as the one of The Three Keatons, a family vaudeville act. Without doubt one of the greatest ever filmmakers, but shackled to the studio system throughout the 20s. Unlike Chaplin or Lloyd he was a poor businessman and owed a lot to Raymond Rohauer, who collated his catalogue, restored prints and re-launched the great artist to huge acclaim at the Venice Film Festival in 1965. Keaton couldn’t understand the adulation! I organised a UK tour of this library for Rohauer (10 features and 20 shorts) so that all could share the joy! He never fails to make me smile.

I undertook the same ‘travelling salesman’ role with Murnau’s Sunrise whilst at Birmingham in the 70s – where I discovered this passion. Sunrise never fails to make me cry – what an ending!

I can’t sign off without thanks to just a few of the very many who helped carry the Festival this far! The late Sorley McDonald and Liz Scott, Jean Khalfa, Becky Innes, Bill Thompson, and to the current team lead by Iris Ordonez, Cristina Roures and Owen Baker, the Festival programmers: Kayleigh Barnes, Margaret Deriaz, Lindiwe Dovey, Loreta Gandolfi, Kate Jones, Ramon Lamarca, Bill Lawrence, James Mackay, Matthew Webb. And to all those who have supported the work of the Trust enabling stability for its year round activity – especially The Technology Partnership (TTP), Pamela Raspe, and the Eligator Sansom Family Fund.

I shall continue working with the Film Trust to develop our community screening programme across Cambridge and to help with the recruitment of my successor for the 40th Festival in 2020. I had hoped to call time next year – 40 in 2020 had a lovely symmetry, but circumstances change… "

In this year's Festival program, Chair of the Cambridge Film Trust, Isabelle McNeil writes of Tony...

"Tony Jones, Festival Director. The familiar title fails to convey his multifaceted role, not to mention the tireless commitment Tony has brought to the Festival. He has been producer, entrepreneur, programmer, fundraiser and the heart of the creative vision that has made the Cambridge Film Festival so special.

When Tony and I set up the Cambridge Film Trust 13 years ago, we saw that cinema exhibition was changing fast; the opportunities to see and show a diverse range of films were declining. We wanted to counter this with lasting structures within and beyond the Festival to continue to draw people together to watch great cinema. It has been an uphill struggle, but Tony’s passionate enthusiasm for film, his boundless energy, ideas, contacts and unwavering determination have kept us going.

It has been a privilege to work with Tony and to be involved in the Festival and its many related activities. Tony picked up the Festival in its early days and built it up into an extraordinarily rich event. He has worked with filmmakers, distributors and programmers from around the world. Over the years, he has given numerous talented people their first start in the film industry. He has championed filmmakers young and old, first-time directors and auteurs. Through all this, his love of European and global independent cinema has been a guiding force.

There is no doubt that without Tony, the Festival would not be here today. He will be enormously missed as Festival Director, but his presence will be felt at all our festivals to come; he will continue to lead on key activities of the Cambridge Film Trust. We wish him well with all his future projects and thank him for his tremendous dedication to cinema in all its forms."