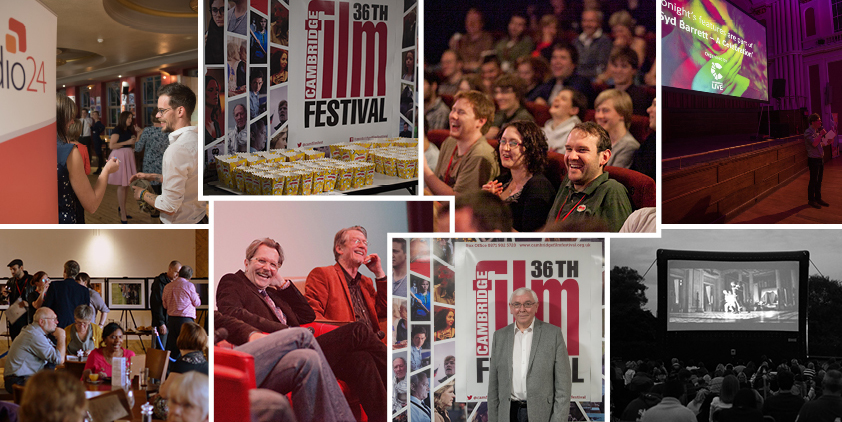 Thank you for your interest.

The Cambridge Film Trust is looking to recruit new trustees to join us in our work running the Cambridge Film Festival and promoting film culture and education in Cambridge, the Eastern region and around the UK.

Our flagship event is the annual Cambridge Film Festival, one of the longest running and most diverse festivals in the country. We also have screenings and events year-round enabling people to be moved by, learn about and interact with film.

We’re looking for enthusiastic individuals who want work on constructing and implementing our vision for the future of the Festival.

To apply please email volunteer@cambridgefilmtrust.org.uk with your CV. The deadline for applications is Friday 6th April, 2018. If you have any questions about the role please do get in touch.

Who we are looking for

We’re looking for people who, like us, has a love of cinema and a passion to engage diverse audiences with a broad range of films – especially films that might not otherwise be seen, as well as our aim to promote a better understanding and knowledge of cinema, and, through cinema, of the world around us.

We are particularly keen to recruit people with skills and expertise that will complement and strengthen our current board members. Skills we are looking for include:

Fundraising: As with all charities, raising funds is an essential part of our activity. We have recently begun to work more strategically on our fundraising in order to ensure the continued success of the Festival and its future legacy.

Business and financial expertise: There are particular financial implications in working with film exhibition, which has greater cost implications than many other arts events. As Trustees we need to oversee the financial planning of the Trust’s activities.

Advocacy and Networking: We are keen to work with local individuals and organisations to promote the Festival and the wider work of the Trust, as well as to develop beneficial partnerships.

Please note, there are some legal requirements that may affect your eligibility to be a Trustee. https://www.gov.uk/guidance/charity-trustee-disqualification

We normally meet  6 times per year in central Cambridge. Meetings usually last 2.5 hours. It may be necessary to meet more regularly or to agree on a particular issue by email between meetings. We also rely on Trustees to get involved in fundraising events such as dinners and screenings, as well as our flagship event the Cambridge Film Festival.

We are able to provide any new trustees with training if they require it and we ask for the following commitments:

You can find out more about the role of a trustee on the Charity Commission website.

There are many general benefits to acting as a charity Trustee: in simple terms, it is rewarding to help a charity to fulfil its aims and objectives. The Cambridge Film Trust is a small team and working with us provides incredible insight into the workings of a film festival and film exhibition in the UK. You will be working with a group of people with deep and broad expertise in film, from the perspective of industry, exhibition, programming, technical innovation, festivals, criticism, analysis and education.

Trustees receive complimentary tickets for events run by the Trust including Film Festival parties and screenings, and regularly meet film directors, actors and others involved in film production, distribution and exhibition.

About the Cambridge Film Trust

The Cambridge Film Trust is a charity that champions independent cinema and fosters film culture and education, primarily in Cambridge and the Eastern region but also throughout the UK. We deliver screenings, events and special seasons that enable audiences to engage with film culture in challenging, instructive and creative ways. We believe passionately that film, as well as a critical understanding of film, can make the world a better place.

The highlight of our year-round programme is the Cambridge Film Festival, which was established in 1977 and is undoubtedly one of the UK's most innovative film events.

Full details about the Cambridge Film Trust and its charitable status are recorded on the Charity Commission website. Our registered charity number is 1120059.

More information can be found on the website for the Cambridge Film Trust.