Click on the link below to go to Amplify! Facebook page. Join live and for the chance to submit your questions to Sylvia.

Ever wondered what a Script Supervisor does? Find out from one of the best out there! Join us for a live interview + Q&A with Sylvia Parker, a Script Supervisor with over 20 years experience, as part of the Cornwall Film Festival Industry interview series in partnership with AMPLIFY! Film Festival. We will be discussing how she got into the role, what being a script supervisor entails, and finding out what it is like to work on some of the biggest films and TV shows out there. Sylvia has worked with directors such as Danny Boyle, Clio Barnard, Kenneth Branagh, Cary Fukunaga, and Yorgos Lanthimos.

Feature credits include the latest Bond adventure No Time To Die, Murder on the Orient Express, The Favourite, T2: Trainspotting, The Theory of Everything, Jane Eyre, and The Selfish Giant. TV credits include the opening ceremony for the London 2012 Olympic Games, Taboo, The Crimson Petal and the White, The Tunnel, and The Hollow Crown. Find out more about Sylvia on IMDB.

This event is streaming live on Facebook on Tuesday 10 November, 7:00-8:00PM. Don't forget to join live for the chance to submit your questions to Sylvia. 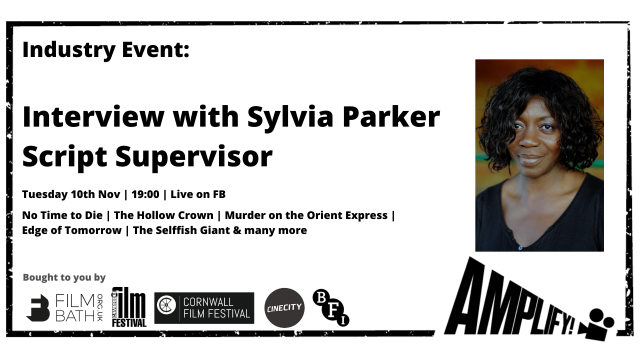